The Australian Grayling (Prototroctes maraena) is one of the threatened species benefiting from improved fish passage in the coastal streams of the Corangamite CMA region.

Denis Lovric, Manager Water Infrastructure recently presented at the International Conference on River Connectivity (Fish Passage 2018) held from 10-14 December in Albury, New South Wales.
Corangamite CMA has had an active fish passage reinstatement program for many years as part of the state government’s Great Ocean Road Estuaries Restoration Project.
Corangamite CMA’s fishway program is focused on providing connectivity for small-bodied native fish species in the coastal streams of the Otway Coast and Barwon River Basins. Many of the fish species targeted were migratory and listed as threatened, including the Australian Grayling (Prototroctes maraena) and Yarra Pygmy Perch (Nannoperca obscura).
Types of fishway works have included the construction of various rock ramp fishways, different forms of barrier removal and the construction of precast vertical slot and cone fishways.
Construction methods used by the Corangamite CMA have resulted in effective, low cost fishways through the use of suitable local materials and contractors and minimising construction times by completing as much pre-work as possible off site.
Performance monitoring of fishways has included fish surveys before and after works, videography and measuring fishway hydraulics. Recent performance monitoring of fishways has seen the return of threatened species to river systems, some of which had not been recorded since the 1980s.
Future planned works include the continued delivery of the Otway Coast and Barwon Basin Fish Passage Plans, as well as large scale works associated with restoring connectivity and improving water regulation in the Lower Barwon River Wetlands Ramsar sites. 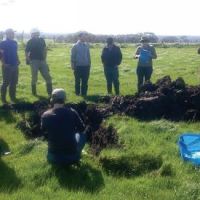