Looking for a lizard that doesn’t have legs! 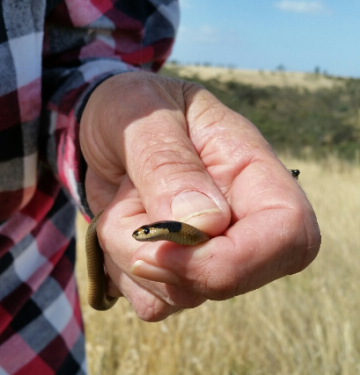 This IS NOT a legless lizard. It is a little whip snake.

The Striped Legless Lizard is a threatened species once common across the Victorian Volcanic Plains grasslands. Sadly it is under threat mainly due to the loss of this grassland habitat.

In 2016 the Corangamite CMA started a survey project as with the help of the Geelong Field Naturalists Club Fauna Group. Five reptile and three frog species were recorded during the surveys including the Three-lined Skink, Blue-tongued Lizard, Little Whip Snake, Lowland Copperhead, Tiger Snake, Striped Marsh Frog, Spotted Marsh Frog and the Common Froglet. Unfortunately, no Striped Legless Lizards were recorded, however, this is not surprising given their rarity and the size of the survey area.

The survey results show that both native reptile and frog species are using these grassland sites which are protected through the Biofund and Plains Tender programs. These surveys were a valuable exercise in increasing community and landholder awareness of the native inhabitants of these areas and there are plans to survey some new sites in 2017 in the hope of finding the elusive Striped Legless Lizard.

This work has been conducted as part of the Conservation Carbon Capture and Victorian Volcanic Plains remnant protection programs.