Critters in the Otways

As part of this program, some landholders in the Otways fenced off bush lands, working in very difficult conditions. The fencing was put in place to stop farm animals accessing the bush land. This helps protect it, and lets the natural ‘cool temperate rainforest’ re-establish. This type of rainforest is threatened, meaning there is not a lot of it left.

A bandicoot on the run in the Otways. But the motion sensor cameras were fast enough to capture its image.

What’s great about cool temperate rainforest is that it is home to a large range of native Australian mammals.

To see if the fencing project was working to help these mammals, a camera with special movement sensors was set up at the project site. Every time something moved past the camera, the movement sensor was triggered and ‘snap’, a photo was taken!

The camera captured some great pictures. Two long nosed bandicoots and an antechinus were detected at the site, along with many of our much loved usual suspects such as wallabies, koalas, echidnas, bush rats and a range of native birds. It is such a great sign to see this diversity of native fauna using the site, and hopefully more animals will return to the site over time.

This bandicoot is tricky to see! Have a look up the top of the image and you will see his eye glowing in the flash from the camera. 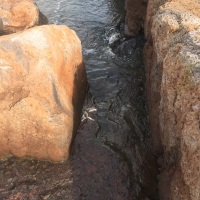 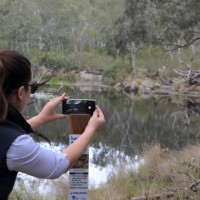